My initial design for the Goldilocks Analogue was flawed in several ways, so I revised the design and produced a new prototype.

Following up on the initial testing matched against the Stanford Analog Shield, I’m now testing against the Open Music Labs Audio Codec Shield. 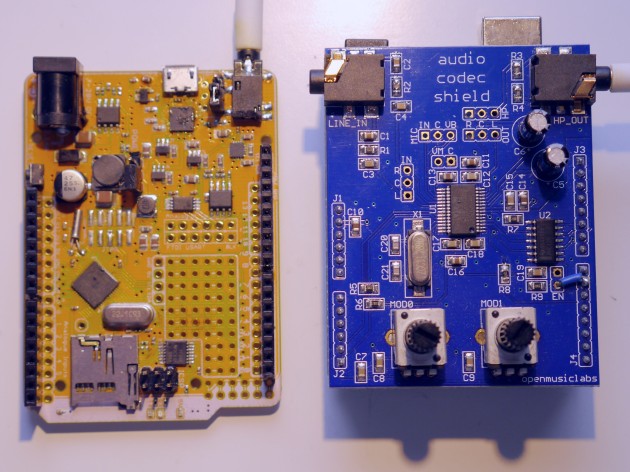 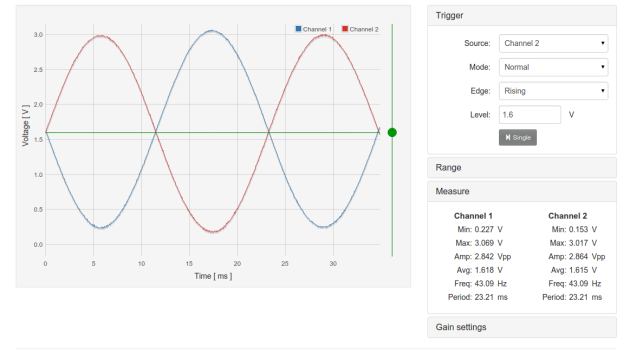 The Audio Codec Shield uses a very capable Wolfson Audio WM8731 device to generate its output. The WM8731 has stereo 24-bit multi-bit sigma delta ADCs and DACs complete with oversampling digital interpolation and decimation filters. Digital audio input word lengths from 16-32 bits and sampling rates from 8kHz to 96kHz are supported. The WM8731  has stereo audio outputs which are buffered for driving headphones from a programmable volume control and line level outputs are also provided complete with anti-thump mute and power up/down circuitry.

Nominally, it is unfair to compare the MCP4822 12 bit DAC against the 24 bit 96kHz WM8731 DAC, but let us see how this looks, when both are driven with 44.1kHz 16 bit inputs. But, based on pricing information from Digikey, they are available at around the same price range, so this has to be a reasonable test.

Testing was done using a 16 bit 1024 sample Sine Wave file. Outputs were generated by a timer triggered to interrupt every 22.7us (44.1kHz), and produce a new output level. Testing should show only a main signal at 43.1Hz, and the reproduction frequency of 44.1kHz. The Goldilocks Analogue discards the lower 4 bits of the samples and only outputs the 12 most significant bits. The WM8731 could produce 24 bit audio from its DAC, but in this test it will be run at 16 bits only. 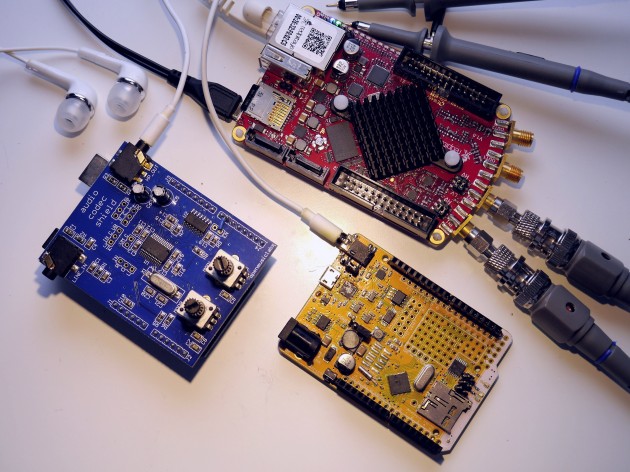 All outputs generated by a 1024 sample 16 bit Sine wave, generated with a 44.1kHz reconstruction sample rate, triggered by an interrupt timer.

The top of the wave form 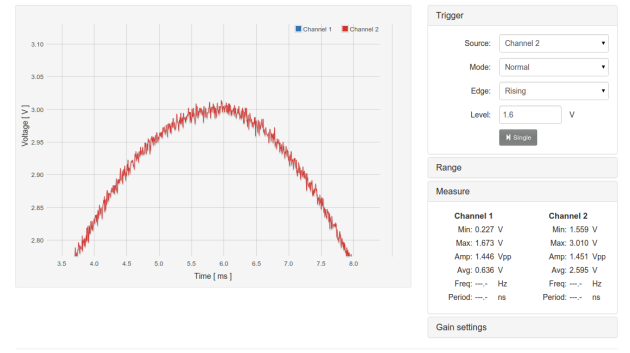 and the bottom of the waveform. Show some high frequency noise. This could be removed by the on-board digital filters on the WM8731, but in this testing situation the have not been turned on.

Looking at the spectra generated by both implementations up to 953Hz it is possible to see harmonics from the Sine Wave, and other low frequency noise. 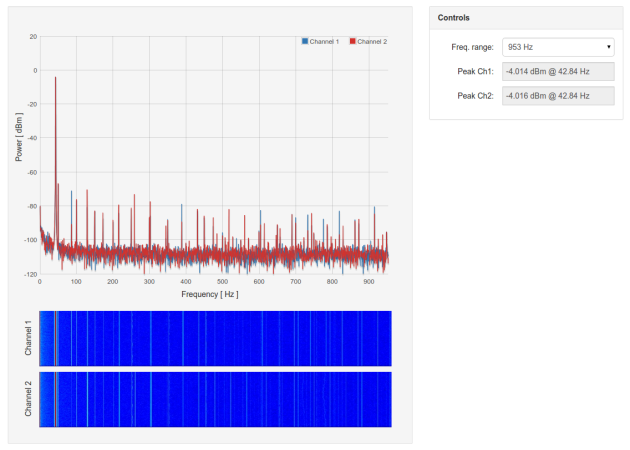 The Audio Codec Shield has a significant noise present at 50Hz, which may be caused by noise leakage through the PC USB power supply not being completely filtered before the supply is provided to the WM8731. Other noise rises up to 80dB, and is present right across the spectrum.

I’ve added some algorithmic symphony code to both solutions.

Here’s a short clip of one 8 bit algorithmic symphony played by the Goldilocks Analogue.