The only red Italian two-seater that I will be able to afford has been in my garage, it seems, forever. But I’ve never written about it. My Piaggio Vespa PX200E was purchased new in Hong Kong, in 2002, and has been a quiet (cough, ahh not really) and simple pleasure for all of that time.

Whilst I may not ride it so often, just knowing that it is in the garage patiently waiting to whisk me away from my cares is a comfort and is a calming pressure-valve.

In Hong Kong the Vespa PX200 was used far longer than in most other countries, because automatic scooters were often unable to manage the extreme inclines prevalent on the Island. The geared PX200 allows the rider to manually manage the clutch and not stall or burn out on the hills. I rode mine with friends and we were able to get into places that were closed to cars on the weekend because of vehicle volume, and with public transport packed to overflowing. Reaching the beach or country park on a scooter is the best way possible.

There is a strong scooter tuning culture in Hong Kong, and my bike was built by Tom L who also ran a civil engineering company in his spare time.

One highlight of the Hong Kong stay, was using it as my “wedding car”. There’s nothing like riding off with the bride on the back of your bike. Ride it like you stole it. 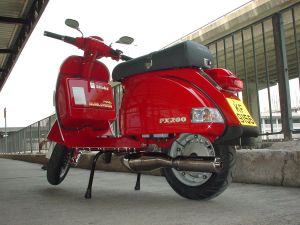 In England, the registration approval process was complicated by the difficulties in achieving the required noise emission levels. Fortunately the helpful DVLA assessor was unable to maintain the required engine RPM and check his sound level meter at the same time. The lack of a flywheel makes the engine difficult to hold at a fixed RPM. Standing back, I noted that instead of achieving 99 dBA required by legislation, the actual reading was around 115 dBA. Finally the assessor asked me to assure him that there would be only 1 bike of this type imported (yes Sir), and that I would not ride about in town making a nuisance of myself (no Sir, of course not), and we were compliant and free to go.

Despite the short 4th gear and a speedometer only marked to 120 km/h,  I could hold 135 km/h on the motorway, at least until the fuel ran out. Running out of fuel was a constant worry when travelling at a reasonable speed. 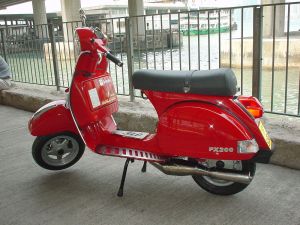 After bringing it to Australia, I found I needed to ride it from Melbourne to Sydney. It was a long and fairly uneventful ride. The only real excitement was managing fuel usage. Cruising at 110-115 km/h meant that I wasn’t worried about being rear-ended by a massive semi-trailer, but that meant I needed to stop and use the 5 litre reserve can on every leg. Slowing down to 95 km/h allowed me to get between rest stops without stopping to fill up from the reserve can, but then trucks overtaking was a real concern.

Riding in Sydney with the Gasoline crew was a highlight. Buzzing the CBD like a swarm of angry bees, on the way to the watering hole, was a weekly fixture in my social calendar.

For the past few years, not much has happened. But that feisty red Italian still patiently waits in the garage, for that time when I just have to get away and recapture my freedom and youth (at a conservative speed, and with minimal expenditure).

The standard PX200 engine produces 12 hp @ 5,700 rpm. This is enough to get it to a maximum of about 105 km/h, with a tail wind. But tuning the PX200 motor to generate far MOAR POWR is simply a matter of selecting the right components, and making choices about drive-ability, reliability, and ease of use.

Horsepower is generated by a Malossi 210 cc cylinder and piston kit, with the transfer airways ground open and polished, together with a SIP cylinder head and Mazzucchelli PX200 racing crankshaft. The exhaust is fed into a SIP stainless steel polished cross-over pulse tuned exhaust. Using the cross-over exhaust means that a spare tire will no longer fit, so a can of puncture repair lives in the glove box.

The choice of carburetor has a large bearing on the maximum horse power produced, but also affects how the fuel / oil mixture is prepared. I elected to stay with the standard 24 mm Dellorto, but with jets appropriate to the revised performance levels.

The Malossi / SIP / Dellorto trim is a path well travelled, and this combination produces upwards of 27 hp @ 7,500 rpm.

To get this additional power to the rear wheel, a strengthened COSA type clutch with a closed basket was used, together with racing clutch material. Never the less, in just a few thousand Hong Kong km I had to do three clutch replacements. Not sure whether this was due to the hill starts, or simply having too much fun.

A short 4th gear from the PX150 is fitted. This reduces the top speed (down to 135 km/h), but it makes carrying a pillion passenger a more enjoyable experience.

The cast metal flywheel and ring gear has been removed, and replaced by a HP4 fan wheel. Removing the  flywheel dead-weight contributes greatly to engine responsiveness. Having the plastic fan flywheel means that that the electric starter motor was redundant, and was simply more weight to be removed.

The standard PX200 dampers were replaced by a pair of Bitubo adjustable dampers. These contribute greatly to stability at speed, and reduce rocking under acceleration and braking.

Finally, to dress up the package a little a set of SIP brushed stainless steel laser-cut floor-boards was fitted. Also a Daytona tachometer was mounted into the top of the glove box.

All of the initial custom fitting, build and, engineering was done by Thomas L in Hong Kong.

In 2007, Gasoline in Sydney did an engine, clutch, and gearbox rebuild.